How does shockwave treat suspensory ligaments? 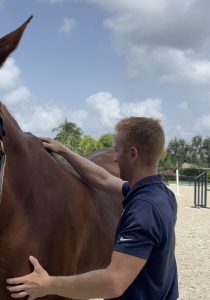 In horses, proximal suspensory desmitis (injury) may involve just the ligament itself and/or the bone that it originates. This also applies to suspensory branch injuries since the suspensory ligament branches insert on sesamoid bones as they support the fetlock. In some cases, there is bony remodeling at the attachment sites of the suspensory ligament which can be treated with shockwave in addition to other adjunct therapies.

Can shockwave be used for other soft tissue injuries?

How does shockwave heal bony injuries?

Once the shockwave contacts the bone, a majority of the energy is transmitted about 1-2cm into the bone. This energy stimulates new bone formation by increasing regional blood flow, activating osteogenic (bone) factors, and recruits cells that stimulate stromal cell growth as mentioned previously.