How does shockwave work in horses? 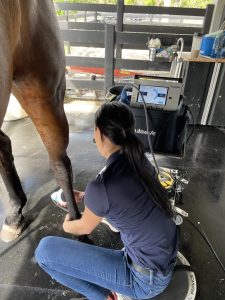 Are all shockwaves created equal?

How is the pressure wave, or shockwave, produced in the field?

Electrohydraulic shockwaves are produced using electricity in a fluid filled probe. A spark is created from a high voltage discharge between two electrodes, which pushes the fluid away, and towards the probe head in a focused manner. The fluid then quickly vaporizes, which creates a space for the fluid to return to the space near the electrodes. This movement of fluid inside the probe head creates the pressure wave (soundwave) which then propagates through the coupling gel on the outer surface of the probe, and into soft tissues.

How does Shockwave heal tissues?

Once the soundwave is generated from the probe head, the wave travels through mediums of similar acoustic impedance and progresses without impedance. In other words, the pressure wave will travel through soft tissues that are similar in density without resistance or effecting the frequency of the pressure wave. Once the acoustic impedance changes (i.e., when soft tissue meets bone) energy is released.

See our additional articles which go into detail about how shockwave can be used to soft tissues, bone, and back pain.